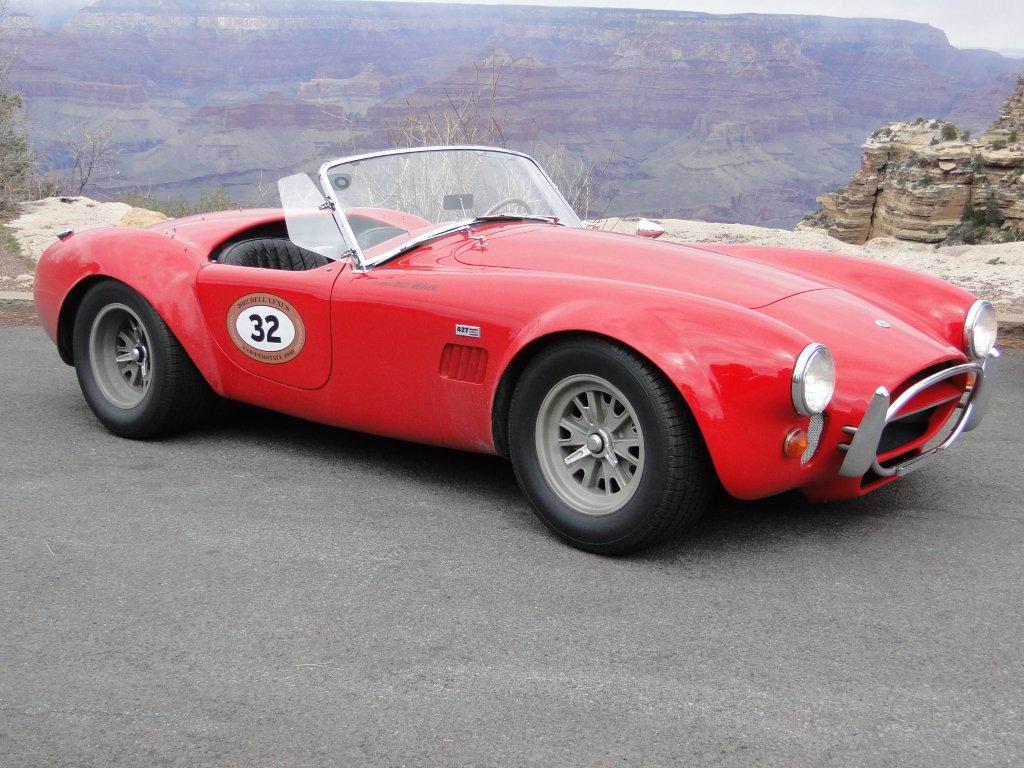 Former owners include Indy winner and racing great, Bobby Rahal, and Jim Farley, Ford President of Global Markets.  It still has it’s original engine but it has been pumped up quite a bit. Upgrades include heads, intake, carb, headers, and a bigger radiator.  It has never been apart or restored. It has all the things that are usually missing on Cobras: original leather seats, original (irreplaceable) carpet, top, tonneau, jack, and sidecurtains .

I talked to Lynn Park in early 2005 and told him I was looking for a Cobra. He called me when he heard that this one was available. He had known about the car for a long time before the owner decided to sell it. Lynn and Mike McClusky had completely gone over the car, had it on a lift at McCluskey’s and spent about an hour looking for anything wrong. According to Lynn and Mike, who are two of the top experts on Cobras (nick-named Mr. Cobra, Lynn owns ten Cobras and McCluskey built cars for Carroll Shelby), 3246 is unmolested and shows no damage history.  Some upgrades have been done ( carb, radiator, hoses, etc), but the body, motor, transmission, etc are all original. Lynn was impartial and objective and described the car as a great looking and driving car. Knowing that Lynn knows more about Cobras than I (and most everyone else) ever will, I took his word and bought the car from Jim Farley. Lynn was exactly right and I was totally pleased when it got here; it was even better than I expected. It has just over 15,000 miles (19,000 now) and this is backed up by Lynn. It is also consistent with all the paperwork I have and the information in the Shelby registry.

Tons of paperwork that is with the car are shown below: Original 1967 bill of sale to Kiriluk, loan papers, insurance papers, copy of title to Rahal Motorsports, itemized bill for the engine rebuild at McLaren, Autoweek article where Bobby Rahal says that one of his Ford highlights was the day he bought his 427 Cobra, copy of Jim Farley title, etc.

This car is much stronger than you would expect with the original engine. I’ve hardly ever pushed it hard, but can say that it has tons of torque and is plenty fast.

I can’t verify this but will relay it as it was told to me. Dan Mershon, well known classic and muscle car dealer who has owned several Cobras, was at my home when 3346 was sold. Dan asked me about the history of this car. When I told him, he said “Oh, that was Bobby’s (Rahal) car! He’s my neighbor and I’ve ridden in that car. It’s one of the fastest Cobras I’ve ridden in”  I told him the McLaren paperwork didn’t list any major upgrades. He said its possible that there were modifications that weren’t documented, but I can’t say for sure. Maybe the mods were done before or after. I knew that it had been rebuilt by McLaren, and I’ve learned that it has Cobra Jet heads,  some kind of special intake (Sidewinder?) and some tuned headers. I don’t stress it, but you can easily feel it has serious power. The good thing is that its docile, runs very smoothly and has never run even on the warm side, even here in the height of the South Carolina summers. I guess a company like McLaren can make a big block produce big HP without much fuss.

This will confirm that Mike McCluskey and I have examined the above referenced Cobra and have determined that there is no evidence of any body damage or repair.  Furthermore, it appears as though the body is original.

In researching prior owners it is clear that the car’s mileage is accurate.

The engine in the car is the original unit, having been rebuilt by Bobby Rahal when he owned the car.  It probably wasn’t necessary but was something Bobby Rahal wanted to do since he has resources to do so.

Mason’s in Spartanburg, SC, had the Holley carb rebuilt.

Lots of history and paperwork, original bill of sale and later insurance card show that the Kiriluks owned the car for 30 years. Rahal title, and paperwork showing that McLaren did the engine work.

The last is from an AutoWeek article about Ford’s 100th anniversary. They asked Rahal and other prominent car people about their most memorable Ford moments.

Over the years, 3246 has successfully completed three Cobra tours and the Copperstate 1000, all without a single hiccup. Before each trip it was checked and fully serviced.

50th Anniversary Jubilee Tour in Virginia. 3246 in the middle. 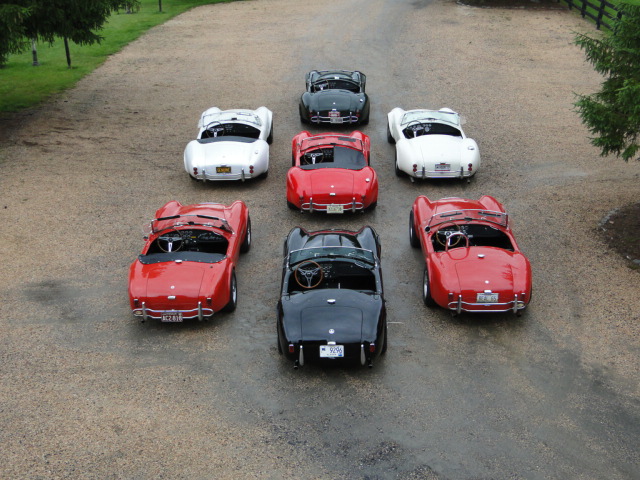 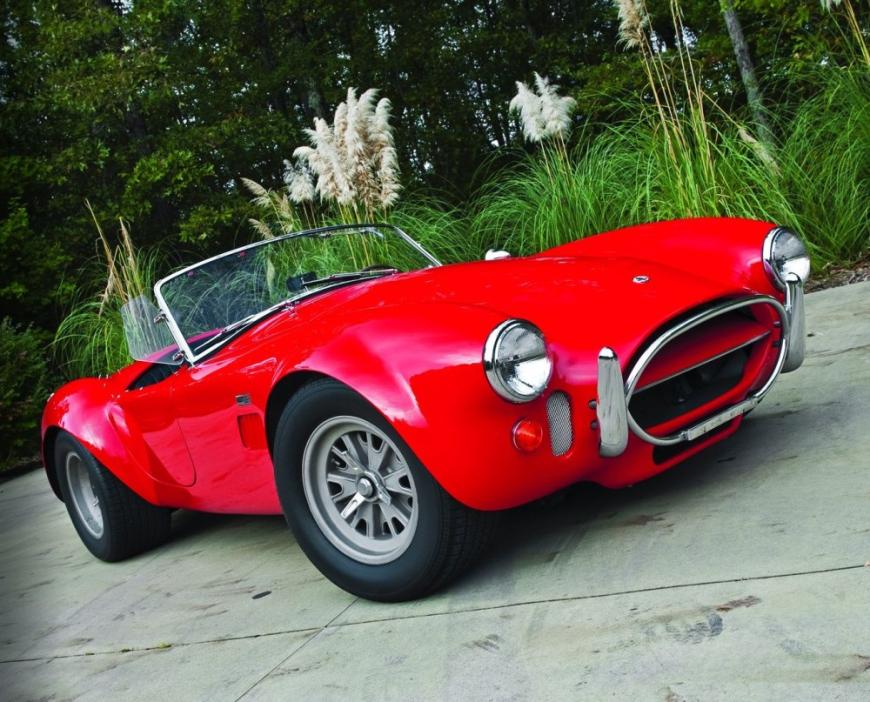 Owner’s View
Like a lot of people, after I first saw a Cobra–I guess I was 13 or 14 years old–the interest never waned.
I remember somebody bought one in the town I lived in when they were new. I just never got them out of my system.
I just think they’re magic. I think Cobras were a once-in-a-lifetime thing that came along by accident. This car, just because it’s mine, of course, I’m comfortable with it, familiar with it… My son used to say it’s like a friendly lion. It’s just docile. It’s not real loud. It sits there and idles. It doesn’t shake up and down or make a lot of noise. But its bite is worse than its bark.
Everybody brags about the value of them going up and they say, “Aren’t you glad you’ve got those Cobras because they just keep getting worth more and more money?” Well, I’m not glad they keep getting worth so much more money. I wish they’d go down so I could buy another one.–Billy Weaver