“Some sports cars are admired, by a select few who understand exactly what they’re looking at. Others, like the 1965 Shelby Cobra 289, are admired by anyone with a pulse.”  From Sports Car Digest

Dan Case is widely considered the authority on accuracy and originality of 289 Cobras from 2201 and up. Dan is an engineer with a very critical eye for detail and will not hesitate to point out what is incorrect on a car, even if it’s as small as a washer. Dan has been a tremendous help to me and has taken a lot of his time to give me advice on the preservation of this car. Two quotes from two different emails from Dan, “….It is unlikely a more original car exists. It is a gem….” and “My opinion… is that CSX2384 is the most desirable unrestored Cobra known currently.”

This is a letter written by Tee Fagg, Jr, about  the history of 2384 from the time his father, Ray Fagg, Sr. bought it new.

December 8, 2011
My father, Raymond T. Fagg, Sr, was employed as a mechanic at Andy Clark
Ford. They received Cobra CSX2384 in 1964 and he purchased it new from the
dealership. My father gave the car to me before he passed away, so it has
been in our family since new, always owned by a Raymond T. Fagg. It has
always been with us in Bluefield, WV.
Dad didn’t like the white wall tires and changed them when he got the car.
Very soon after he got the car, he changed the mufflers and moved the
exhaust to come out in front of the rear wheels. The original mufflers are
still with the car.
My dad drove the car some in the first few years, then drove it much less
after that. I guarantee that the mileage of 9075 is the accurate mileage.
The car has never been damaged or had any paint work since he bought it new.
The engine is stock and has never been out of the car or modified.
I have checked with my mother, who remembers the car since the day it was
bought and she confirms this.
The car still has the complete tool kit with the Elora tools,
Shelley jack, top, side curtains, hardtop, key fob from Shelby, original
Cobra radio, luggage rack, and more.
There is an original title with the car that was issued in 1967, when the
loan was paid off. It was titled with the motor number instead of the CSX
number. There is also a current WV title in my name with the correct CSX2384 number on it.
All of the above is correct to the best of my knowledge.

Mr. Fagg, Sr, was a mechanic and did a few things that were considered upgrades in the sixties. He changed to a bigger carb, but we replaced it with the original. He also changed the exhaust to come out in front of the rear wheels, which we decided to leave because this was a common period, or “day two”, change and I would rather leave it this way than have shiny new pipes coming out of the back. These would be correct, but not as close to the original time period as the side pipes. The tires are probably the first change, or the ones that replaced the Goodyear 7.35 white walls.  They appear to be from the early or mid seventies. It has been cleaned and polished a little, but the number one priority has been to preserve the originality.  There are a lot of great restored Cobras out there, but we think that 2384 is one of the  few that are still close to the way were they when they left Princeton Ave, LA,  in the sixties, a rare piece of unmolested Shelby history, and it should be preserved in its original state rather than restored to shiny perfection. 2384 is driven and enjoyed regularly.

Mr. Bill Warner and Company put on a great event at Amelia Island. 2384 got attention being the only original, unrestored Cobra there. Click here to see the Hagerty TV spot that was filmed at Amelia Island about 2384. http://www.youtube.com/watch?v=9KspiMHYSnA 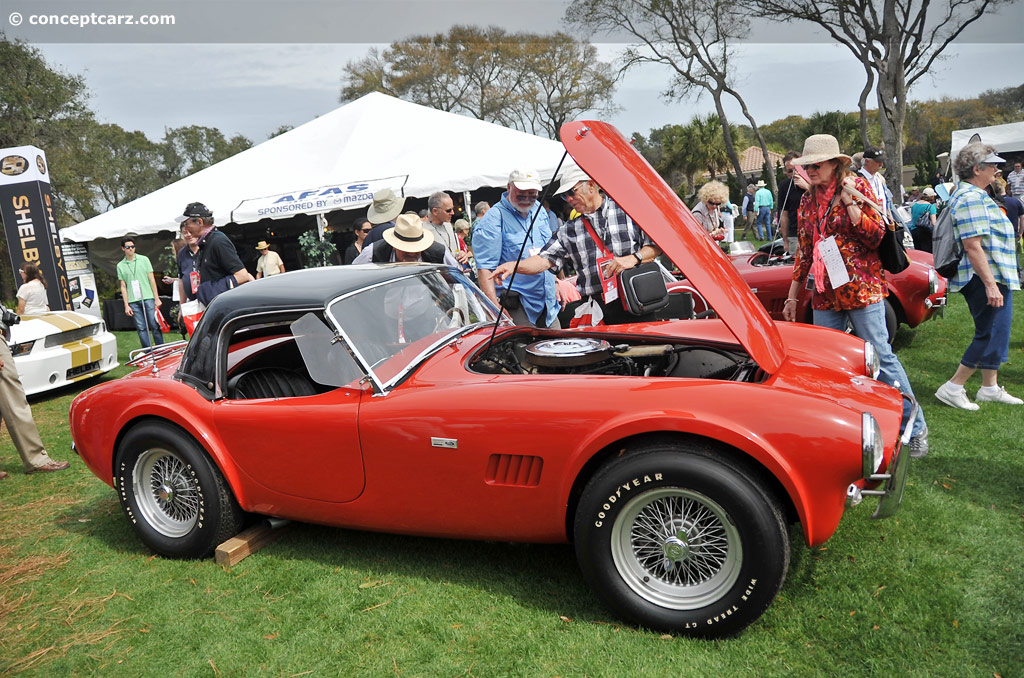 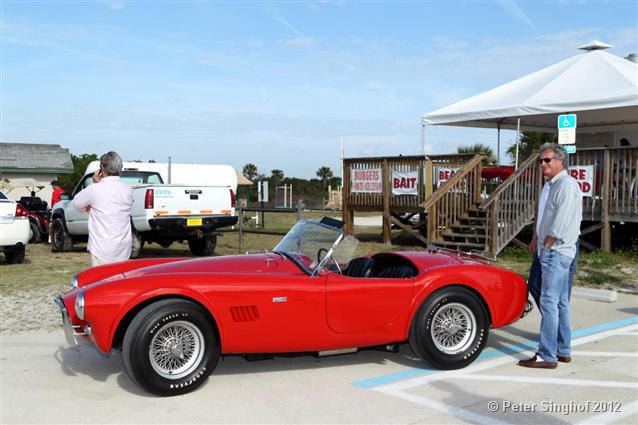 On the tour at Amelia. Stopped for some bait. 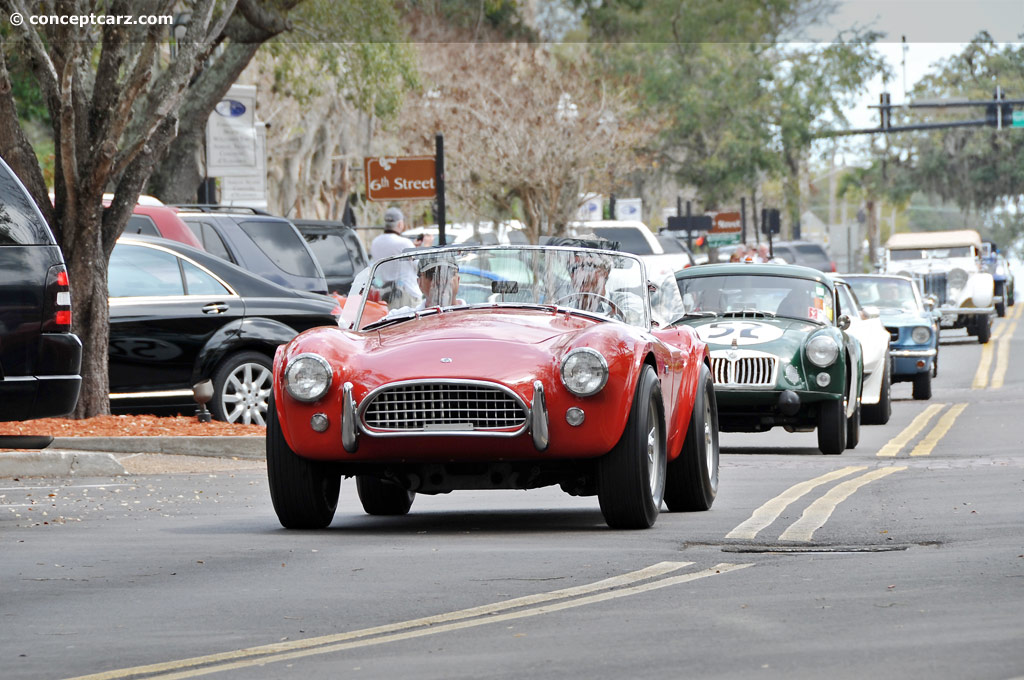 End of the tour at Amelia. Plenty of great cars there. From Conceptcarz.com 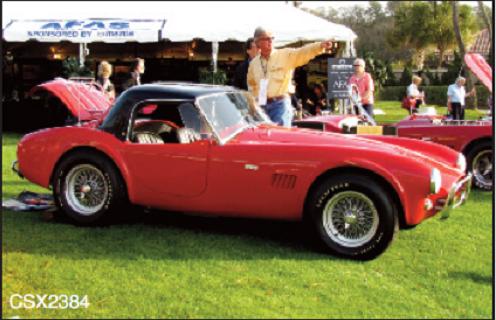 From the Shelby American Magazine, Spring 2012 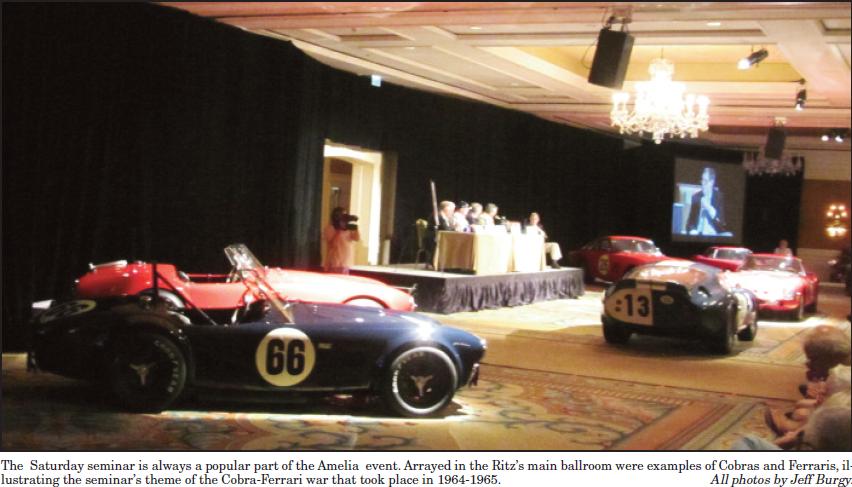 Picture from the Shelby American Magazine. 2384 was among good company at the “Ferrari – Cobra” seminar at the Amelia Island. Six cars were chosen to surround the dias. Three were Ferrari 250 GTOs, the World Champion Daytona Coupe, a 289 racer, and 2384, picked to represent the origins of the Cobras that beat the Ferraris in the sixties. It was a real honor to be chosen for this.  On the show field, the Cobras there were; the most famous of the six Daytona coupes, the two Ford owned special bodied Bordinat coupes, CSX2001,  the first Cobra ever sold, owned by Bruce Meyer, one of only two Hertz gold 427 SCs, and a couple more Cobras with racing histories, one prepared to resume its racing career by Bruce Canepa. 2384 was the only truely original street Cobra there and got plenty of attention. I met Bob Bondurant, and Peter Brock the designer of the Daytona Coupe.  It was great to meet Ned Scudder, the official Cobra Registrar and a true Cobra guy whom I had emailed over the years, but had never met. No one has done more than Ned to make sure that an accurate history of these cars has been preserved.

2384 was on the famous lawn at Pebble Beach. Being invited was an honor and going was great fun. The Tour d’Elegance was one of the best parts, a sixty mile ride along some of California’s beautiful coast with some of the world’s best cars. 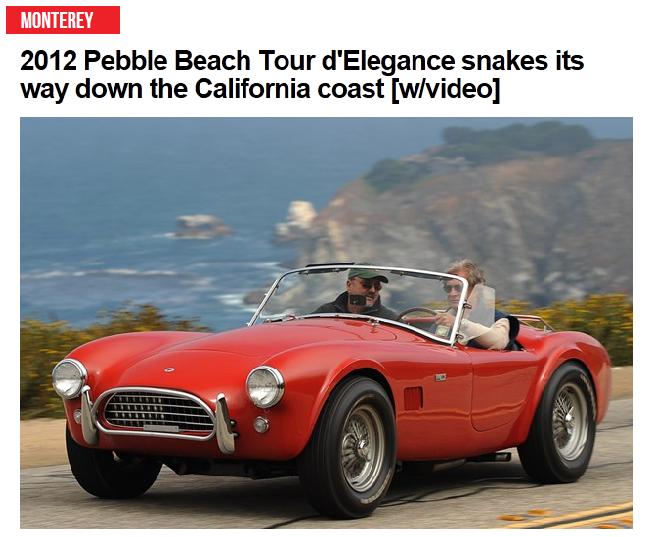 On the tour with my friend Dennis Greene, a serious Cobra guy. Picture from Autoblog. 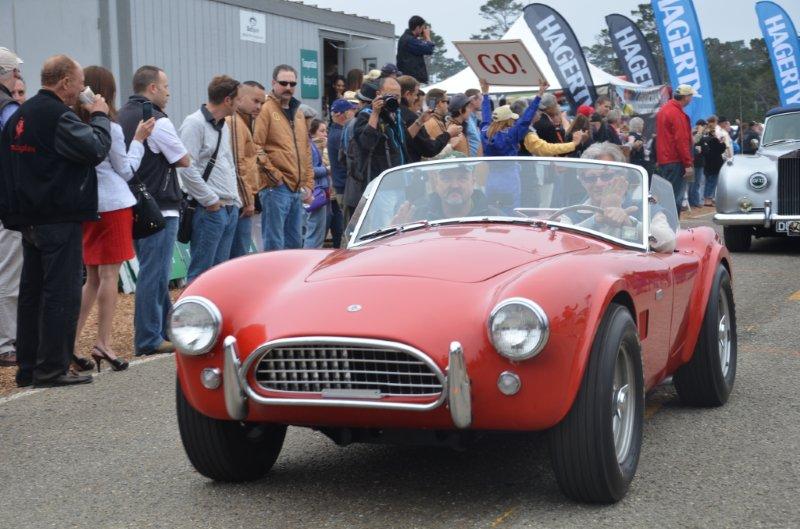 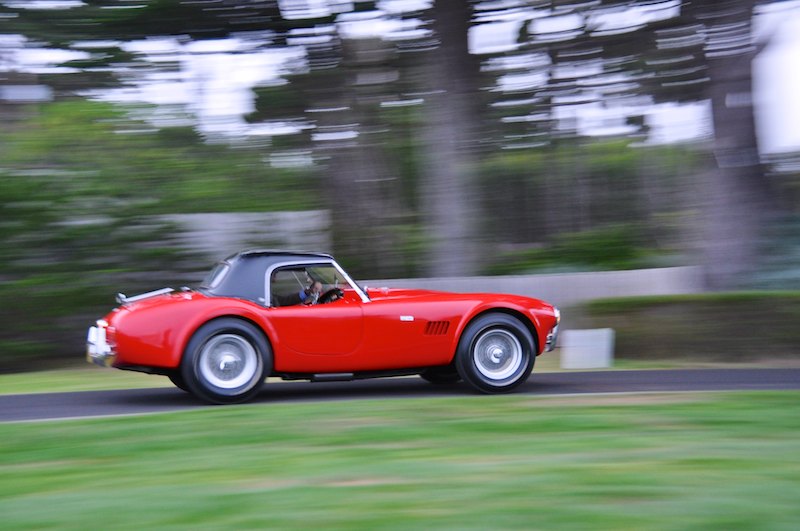 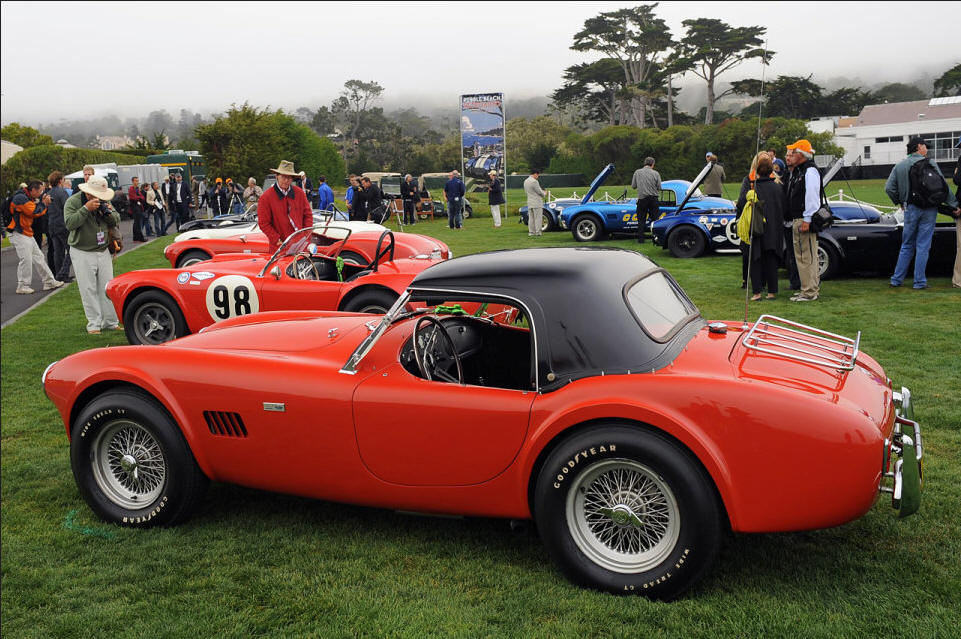 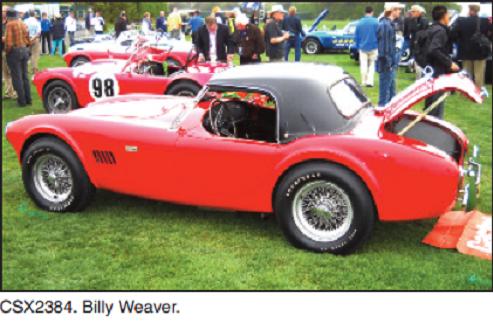 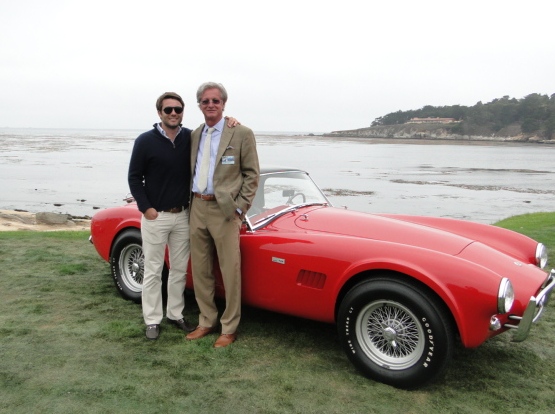 With son at the end of the day.

This was a fun event, too. They are doing a fine job at HHI. 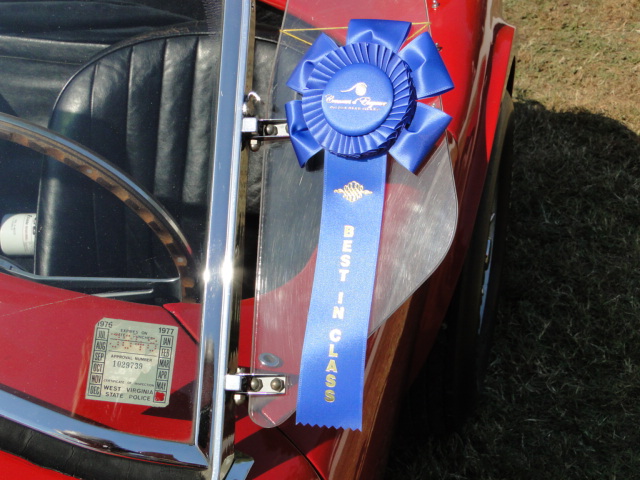 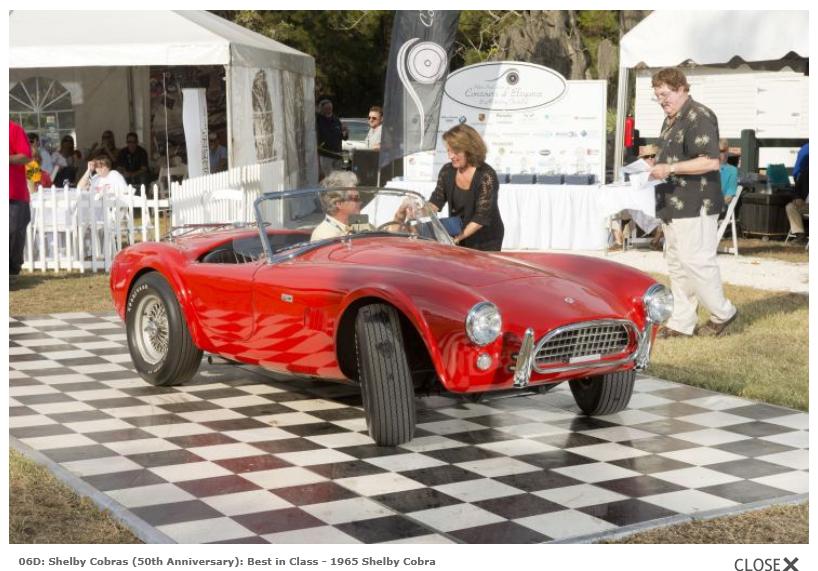 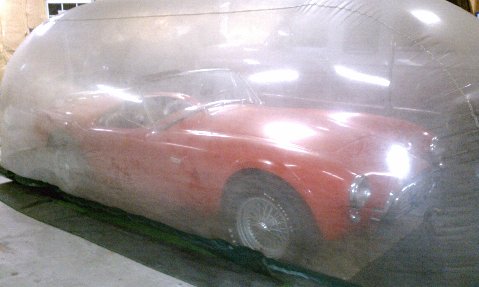 Cobra lived in this bubble for many years.

The owner’s manual is original and shows wear. The brochure was in the glove box, not one of the reproductions. The “mail back” key fob came with the cars. They exist but are very rare. This is the first one I’ve seen that has been in the same car since new. I’ve been told that some or most of them were stamped with the wrong address, not sure.  I showed it to Peter Brock. He said, “Oh, yea. I remember designing that. First time I’ve seen one in a long time.” The fan belt was with the tool kit, I’m sure Mr. Fagg bought it as a spare in 1964. Wrapped in 1960s West Virginia newspaper are the original rear mufflers that were removed to install the shorter exhaust. . The last photo may not seem to fit in, but they are sunglasses that I found under the seat. I can picture Mrs. Fagg in the right seat  (or driving) in the 60s wearing these glasses which were stylish at the time.

The pictures below may be boring, but to a hard core Cobra person, they show the originality of the small parts in the engine compartment.

Spare is a Goodyear white letter Wide Oval, too, but is mounted upside down so you don't see it. Clamp for top bows is not in this picture, but is with the car.

Correct (I think) wing nuts. There were odd ones used on Cobras.

The dipstick handle wasn't painted like a lot of Fords.

Yes, the paint is gone on the top, but it will stay that way. No shiny new paint is going on this part.

The red cap temp sensor may be one of the last working examples in a Cobra.

Not many of these around. They were used on other Fords and Ford guys will fight over an original like this.

When I first looked at the car, I thought the heater hoses had been spliced and then tied together. After looking at pictures from a 1964 magazine, I realized that it was exactly as it left Shelby. The same lashing is used in other places under the car to hold things in place and it is still there. 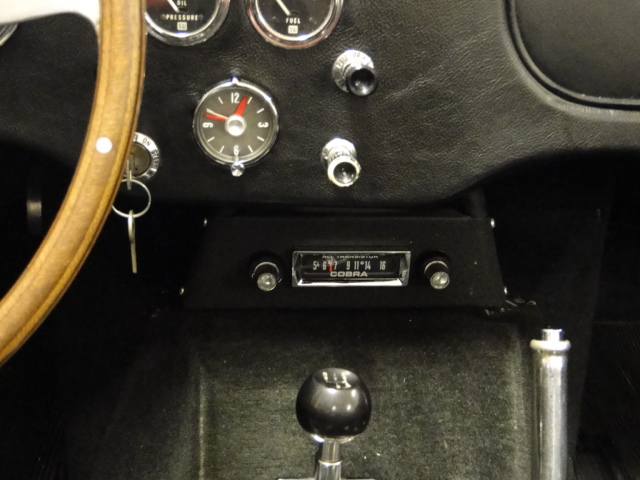 Radio and clock both working (today, who knows about tomorrow?) Many Cobras have one of the Ford pull knobs that were white and painted black. Evidently when they ran out of black knobs, they used the white ones and painted them black. Over the years, the paint came off, but this is an original characteristic, so it will stay this way 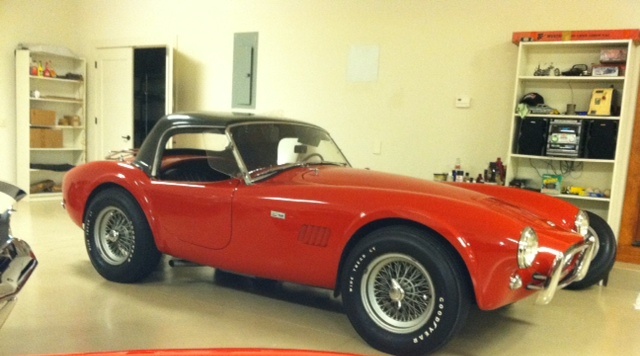 Everything on this page is correct to the best of my knowledge. It’s a work in progress and if anyone sees anything in pictures or in the notes that they can add to, or offer constructive criticism, please do. I always want to learn. Email bw713001 @ icloud.com